The KISS guitars, now and then, in words and pictures
– John Robison, Original Kiss Guitar Designer

Many of you have read about my time on the road with KISS and other bands.  I’ve done a number of interviews, and of course there are the chapters in Look Me in the Eye and Be Different.

I realized there is no archive of photos to go with the stories and I’ve decided to set that straight.

Here they are, in no particular order.  Perhaps I’ll come back one day and rearrange them . . .

And here I am today: 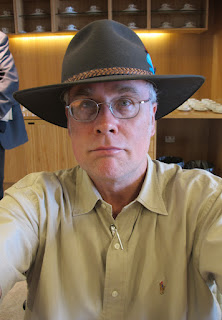 This is Ace Frehley, playing our original light guitar on stage with KISS 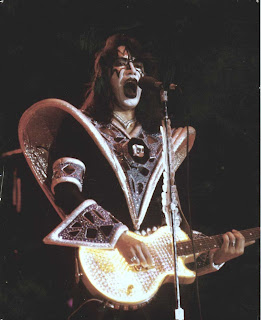 That guitar was a modified Gibson Les Paul TV.  We routed out the face of it, and embedded a circuit board with almost 1,000 incandescent lights.  We set it up to do stripes (you can sort of see that in the photo) and them flash the whole border at the end.

The lights were powered by a Ni-Cad battery pack and the music was transmitted via a Shaeffer Vega wireless rig so the whole thing was cable free.   There was a special XLR-type plug in back to connect a battery charger between sets.

Ace played this guitar on a number of songs over the years but the one it’s most famous for is New York Groove.  He’d start the guitar while facing back in the corner of the stage.  The audience could see something flashing but could not tell what.  He’d walk out backward, turn round, and they would just go wild.

I describe that scene in the opening passage of my book BE DIFFERENT.  I was in my early 20s when we made these guitars.  I am a self-educated audio and electrical engineer.  I met the guys from KISS in New York, while I was working as the American engineer for Pink Floyd’s sound company, Brittania Row Audio.

We built all KISS’s custom guitars in Massachusetts but I had to go on the road to fine tune their development.  I was on the road for all the KISS tours of 78-82 and then the shows with Ace as Frehley’s Comet after that.  Here I am working on another of the light guitars, on the road in some hotel: 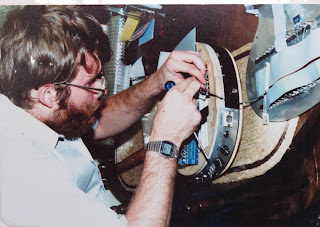 If you look close you’ll see we added a layer of baltic birch plywood to the back of that guitar to thicken it.  That was to allow even more lights (for big halls) and microprocessor control.  Here I am in the Russell Hotel, New York, when that guitar was new. 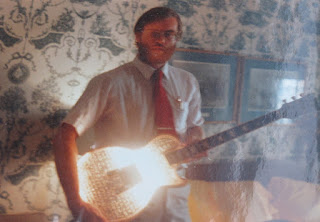 Here I am, in my back yard, with the same guitar a few years later when it came back for service 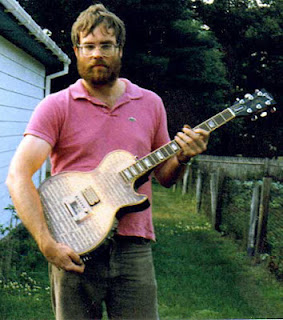 I designed all the special effects guitars KISS played in those years.  I also created a fair bit of the electronics they played through.  That included the light guitars below, the smoking guitars, the rocket guitars and the laser guitar for 1979, among many.
Long Island luthier Steve Carr did the fretwork and tuning to make our creations play.  He also did the metallic body finishes and the custom inlays.
I designed the electronics.  My then-girlfriend, later-wife, and current ex-wife Mary Robison did the assembly. My friend Jim Boughton did the mechanical engineering and fabrication.
Today Mary and I have a son, Jack.  We’re not married anymore (I’m remarried) but we remain close.  Here they are at our house with one of their projects and Oigy, the Imperial War Pug. 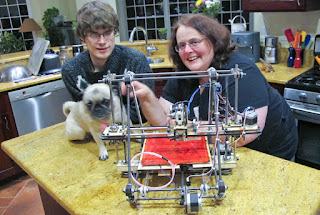 Finally, here’s my son with the original light guitar this spring.  Ace has sent is back to us for refurbishing. 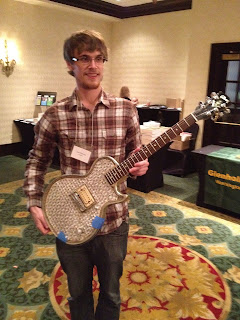 People still ask if we can make more of these instruments.  Actually, we can.

Here I am this spring, with master luthier Jim Cara, who has followed in the custom guitar tradition.  Check out his story here. 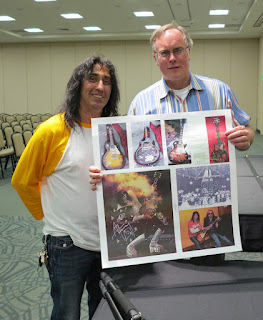 If you’d like to read more, start at page 112 of my book Look Me in the Eye

Then you can continue with the intro to Be Different

In a few more months, you’ll be able to read about my son and the light guitars today in RAISING CUBBY.

I’ll stop back soon with more pictures from my time in music.